Midfielder John Carilli (10), a graduate student studying computer science and central attacking midfielder, scored both goals for the Lobos. The club team played on the Northeast corner of Johnson Field to a crowd of around 50. 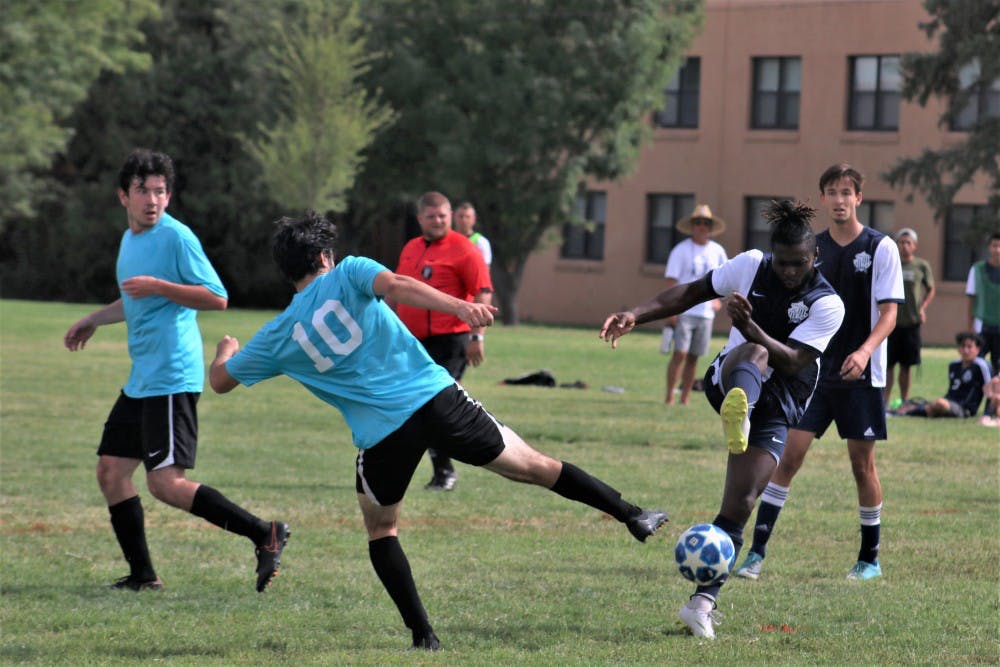 The University of New Mexico Men’s soccer club beat the New Mexico Tech Miners 2-1, sealing their first victory in their first game of the 2019 season.

John Carilli, a graduate student studying computer science and central attacking midfielder, scored both goals for the Lobos. The club team played on the Northeast corner of Johnson Field to a crowd of around 50.

The Lobos scored early in the first 45 minutes and kept the Miners away from their side of Johnson Field throughout that half. Midfielder Joey Jansen, a junior studying business administration, assisted Carillio in scoring the first goal.

Midway through the second half, the Miners tied the game on a rebounded corner kick, beginning an exciting 25-minute run that would see a dozen shots on goal from both teams.

The Lobos started forcing the ball forward but the Miners continually found their defensive shape enough to withhold the push. Several shots flew at the Miners goalkeeper, including a header that bounced off the Miners right goal post.

The Miners, still holding off an urgent Lobos push, drew a yellow card and an offside call that gave the Lobos another chance to take the lead. A jumping tipped save by the Miners goalkeeper kept the ball out of the net and the score tied, 1-1.

Two Miners were taken down in the Lobos 18 yard box, as UNM’s attack on Tech’s side started to waver and the ball found itself on the Lobos side. With around 10 minutes remaining, the Miners took a headed shot at the goal, but couldn’t capitalize on the momentum shift.

As Perea dove to save a goal, a Miner went for a sliding attempt towards the right post, trying to sneak the ball past Perea. The Miner’s foot slid into Perea’s face, briefly bringing out the athletic trainer and sidelining Perea for a few minutes. Not long after, the Lobos drew a yellow card in Tech territory, giving the Miners a free penalty kick. Perea, only minutes after taking a slide kick to the cheek, read the shot correctly, diving right and saving the game for the Lobos.

The Lobos lit back up, keeping the ball out of their half. When the Miners goalkeeper slipped, the Lobos had an open shot on goal but couldn’t capitalize, sending the ball sailing over the net.

The game looked to end in a draw as time slipped away when freshman Carlos Fierro sent the ball back to Carilli. The Miners goalkeeper was fooled by the assist, giving Carilli an open shot to the left side. Carilli took off toward his team’s bench, ripping off his shirt and shouting as his team collided with him in a pile.

The Miners would get the ball back to UNM’s side one more time but never had a chance to score.

The Lobos next play on Friday, Sep. 13, hosting the University of Texas, El Paso on Johnson Field at 7 p.m.

Justin Garcia the Editor in Chief of the Daily Lobo. He can be contacted at editorinchief@dailylobo.com or on Twitter @Just516garc

This site uses Akismet to reduce spam. Learn how your comment data is processed.